We are excited to share the recent press release and BBC coverage of our study into genetic factors contributing to cancer drug related cardiomyopathy.

In this study, published in the journal Circulation, we analysed genes of more than 200 cancer patients from the UK, Spain and the US who had been diagnosed with a type of heart condition called cancer-therapy induced cardiomyopathy, or CCM. We found patients who developed the heart condition were more likely to carry genetic faults linked to cardiomyopathy – and in particular that patients were more likely to carry a faulty version of a gene called titin.

We are excited to share our work using gnomAD to characterise 5’UTR variants that create or disrupt upstream open reading frames (uORFs) and explore their role in disease: https://www.biorxiv.org/content/10.1101/543504v2

We show that these variants are under strong negative selection (indicative of being deleterious), and identify a subset (that form ORFs overlapping the coding sequence) with signals of selection equivalent to coding missense variants.

We find increased signals of selection when these variants occur in the 5’UTRs of curated haploinsufficient, LoF intolerant and known dominant LoF developmental disease genes, supporting a loss-of-function effect of these variants on translation.

We identify specific genes where uORF perturbation appears to be an important disease mechanism (e.g. NF1 and IRF6), and report a novel uORF frameshift variant in NF2 that segregates with disease in two families with neurofibromatosis.

Our approach illustrates the power of using large population databases and grouping non-coding bases by functional effect, to identify subsets of variants that are highly deleterious. Although the strength of selection at the level of UTRs is equivalent to synonymous variants, we see a much stronger signal at these specific uORF-perturbing sites.

Finally, we have created a VEP plugin that annotates 5’UTR variants for uORF-perturbing effects:
https://github.com/ImperialCardioGenetics/uORFs/tree/master/5primeUTRannotator

In our previous posts (June 2017 and October 2017) we explained two of our studies looking at the role of truncating variants in the Titin gene (TTNtv) in dilated cardiomyopathy (DCM). In the first of these, we found that having a TTNtv meant that a DCM patient was more likely to have had a past history of abnormal heart rhythms when they were first diagnosed with DCM. But we did not have enough data to definitively assess whether this was due to rhythms in the upper (atrial) chamber of the heart, the bottom (ventricular) chamber, or both. We also didn’t know whether this meant that DCM patients with a TTNtv were at higher long-term risk of potentially dangerous or life-threatening heart rhythm abnormalities. In our second study, we followed up a large group of patients with DCM but didn’t find an increased rate of major arrhythmic events in patients with a TTNtv. As a whole this group had relatively mild symptoms of DCM at the time of the study (the majority being in NHYA class I/II heart failure), with moderately impaired ventricular function – which puts them in a comparatively low-risk group for arrhythmias. Perhaps as a result, the overall rate of arrhythmic events in the study was low, making it harder to see subtle differences between those with and without a TTNtv.

To investigate further, we therefore started a new study on patients with DCM who also had an implantable cardiac device (ICD or CRTD). Not only are patients with these devices more likely to have an arrhythmia (they are typically given to the patients because they have worse heart function or symptoms) but, crucially, they monitor the patient’s heart rhythm 24-hours a day, 7-days a week. This allowed us to get complete coverage of each patient’s heart rhythm data over a number of years.

Our study, which was published earlier this month in JAMA: Network Open, found that TTNtv are associated with a significantly higher risk of both ventricular and atrial arrhythmia in DCM patients with an ICD or CRTD.

We had a strict definition of arrhythmia, for example only counting a ventricular arrhythmia if it was both fast (>200 beats per minute) and prolonged. These are the rhythms considered to pose the most danger to patients.

Importantly, we looked at the other major factors known to increase the risk of arrhythmia – age, male sex, level of left heart dysfunction and presence of heart fibrosis (scarring) on MRI – and even after controlling for these statistically TTNtvs were a strong predictor of arrhythmia.

Heart fibrosis, or scarring, on MRI is worth delving into a little more deeply. Fibrosis shows up as white patches on the heart in an MRI scan after a contrast agent (gadolinium) has been given via a vein. The presence of this fibrosis has long been known to be a strong predictor of arrhythmia, it’s likely that the scarred area interferes with the way electrical signals travel through the heart. DCM patients with a TTNtv don’t seem to have more fibrosis than other DCM patients – we found that in a previous study and confirmed it again here. However, a remarkable finding in our study was the apparent additive nature between fibrosis and a TTNtv in terms of arrhythmia risk. Of those patients that had both fibrosis and
a TTNtv, 62% experienced a ventricular arrhythmia, compared to only 5% of those with neither fibrosis or a TTNTv.

So how might TTNtvs lead to more arrhythmia in DCM?

This study wasn’t designed to answer this question and much more work needs to be done. But one avenue worth investigating is the fact that DCM patients with a TTNtv seem to have thinner heart muscle walls than those without a TTNtv, as we discussed in one of our previous blogs from October 2017. Thinner walls lead to increased ‘strain’ on the heart muscle cells, which can potentially alter their electrical properties.

Can knowing if a patient has a TTNtv help decide whether or not they should have an ICD? This was a relatively small study and the robustness of the findings certainly needs to be tested in much larger cohorts. Such studies are under way (see our blog post from October 25th 2018) and it is hoped that in the future TTNtv may be one of several factors that can help in risk-stratifying patients with DCM.

You can read our published study here: https://jamanetwork.com/journals/jamanetworkopen/fullarticle/2736938

Many researchers study a particular disease because they have a personal connection to someone who has been affected. For Dr Nicky Whiffin of Cardiovascular Genetics and Genomics group, it happened in reverse.

"I had been researching cardiomyopathies (diseases that affect the heart muscle) for a couple of years when my mum suddenly became very ill. Even walking up the stairs was a struggle, she had to pause halfway to catch her breath. ..." Read more about Nicky's story.

In partnership with Cardiomyopathy UK, we are looking for ways to help people with heart muscle disease participate in research to move science forward and improve healthcare and quality of life. Patients often want to take part in research, but opportunities are concentrated around universities and major hospitals or involve long distance travel preventing many patients from getting involved.

The heart hive will make research accessible to everyone. Patients can upload their own health information to our secure web portal and decide which projects can use it. Genetic information can be collected via saliva kits sent out through the post. Check out http://thehearthive.org for more information. 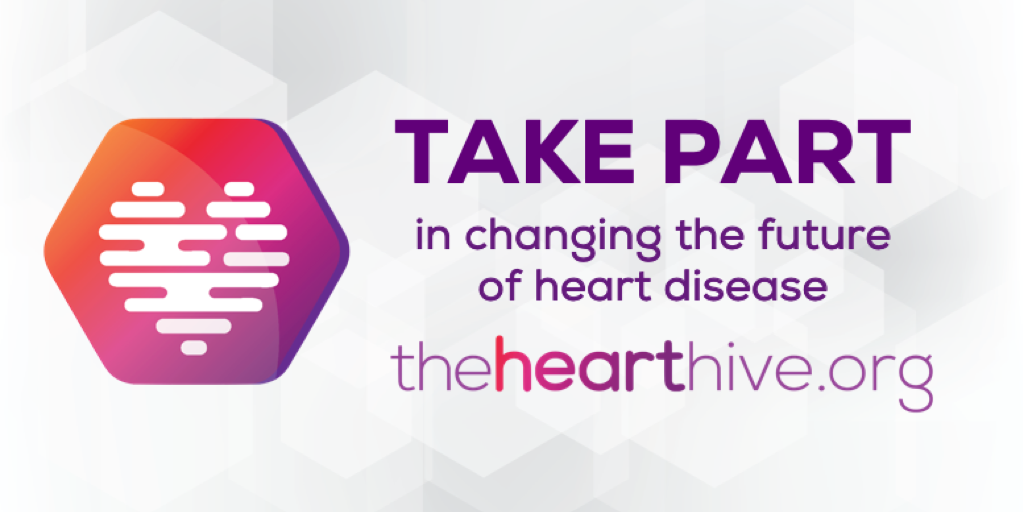 Scientists have revealed a new link between alcohol, heart health and our genes.

The researchers investigated faulty versions of a gene called titin which are carried by one in 100 people or 600,000 people in the UK.

Titin is crucial for maintaining the elasticity of the heart muscle, and faulty versions are linked to a type of heart failure called dilated cardiomyopathy.

Now new research suggests the faulty gene may interact with alcohol to accelerate heart failure in some patients with the gene, even if they only drink moderate amounts of alcohol.

The largest ever study of the heart condition dilated cardiomyopathy (DCM) is underway.

There is fresh hope for hundreds of thousands of people in the UK with the potentially deadly heart condition dilated cardiomyopathy (DCM), as the largest ever study of the poorly-understood disease begins led by Professor Stuart Cook of the National Heart and Lung Institute. The research is funded by an investment of over 2 million pounds by the British Heart Foundation (BHF).

Out this week in Nature: work from Stuart Cook’s Singapore team identifying a new therapeutic target for fibrosis in the cardiovascular system and beyond…

See the press release  and the paper

In our last post you heard a bit about the role of titin truncating variants (TTNtv) in dilated cardiomyopathy, but we had lots more questions at the end.

Well, we’ve now completed a major study of the clinical outcomes of patients with TTNtv. In the research, recently published in the Journal of the American College of Cardiology, 716 patients with DCM, including 83 patients with TTNtv, were followed up for a primary composite outcome of cardiovascular death, major heart failure events and major arrhythmic events. We found that there was no difference in outcomes between patients with and without TTNtv (5 year event rate for TTN positive/negative patients: 10.4%/13.6%, p=0.65).

So, what does this mean?

This study suggests that having a TTNtv doesn’t affect your outcome in DCM. It shows that TTNtv DCM doesn’t have the adverse event profile associated with other genetic cardiomyopathies such as lamin cardiomyopathy. This is potentially really useful information for patients and clinicians.

But does that mean there is no role for titin in risk stratification in DCM? Not quite.

The first point to note is that the patients in the study were largely in NYHA class I/II, with moderately impaired ventricular function. Secondly, whilst this was the largest single center study of patients with TTNtv DCM with independently adjudicated outcomes and CMR phenotyping, the overall follow up time was 3.9 years (median). This is considered medium term follow up. Maybe we were a little early and longer term follow up will reveal differences that this study did not. Finally the number of the events within the cohort was lower than previous studies, not just from registry data but also historic studies in our institution. This suggests an improvement in DCM outcomes overall (note – this is a good thing for patients). Therefore it is possible that longer follow up in patients with a higher risk for adverse events could reveal subtle differences between titin positive and negative patients.

On a general point, I would advise caution when interpreting studies that analyse data in only a subset of their cohort (e.g. survival analysis in only the patients with TTN and not compared to the entire DCM cohort – you may end up just picking up a DCM effect and not a TTN specific effect) or those that present survival analysis from birth (this works for hard outcomes e.g. death, but doesn’t work for outcomes such as heart failure hospitalisations, as you can’t be sure the patient didn’t have an event before they enrolled in your study).

Another important finding of the study was that prognostic indicators for all-cause DCM also predict outcome in TTNtv DCM. This means that the factors that predict outcome in DCM such as LVEF, mid wall fibrosis late gadolinium enhancement, and left atrial size, are still valid in patients with TTNtv DCM. This information is important as we move towards multi-modality risk stratification in DCM – the next part of the DCM jigsaw…